THE MUSEUM IS CLOSED AWAITING INSTRUCTIONS FROM THE GOVERNMENT

WITH A DATE ALLOWING US TO OPEN

Consequently, work has not taken place on the extension to the shed.

However, the foundation was laid just prior to lockdown and our builders will announce possible completion dates as soon as they have clearance to proceed. 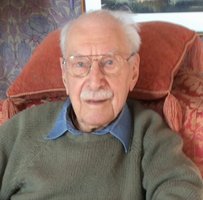 Jack was Steward, Trustee and a loyal supporter of the Museum for over 20 years.
He also wrote a monthly article giving news and details of the activities in the Museum
for the Southwold Gazette.
Jack died peacefully in hospital on Thursday 28th May after being taken ill on Monday 25th.
He submitted his article for the Southwold Gazette on the Monday morning and telephoned me to suggest that as local papers were not being published, we should add it to our website so we have.

Just one other point. Jack celebrated his 102nd birthday in March this year.

May he rest in peace. 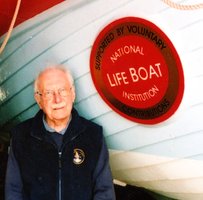 From The Alfred Corry Lifeboat Museum

I am writing this piece in mid-May not knowing if it will be published. The lockdown is still with us but we are now being told to Stay Alert and the first tentative moves in the ‘back to work campaign’ are beginning to have effect, especially in the fields of  construction and manufacturing, so there are grounds for hoping that work on the extension will soon recommence.  During lockdown, work has been going ahead on our proposal to re-create a ‘Fisherman’s Cottage’ at the rear of the enlarged Museum, to show how the families, whose men folk crewed the lifeboat, lived in those days.

We have received two generous donations towards this project: one from the Co-op Society, and the second from the Paisley Charitable Trust, which was established after the Paisleys left Southwold.  Among other activities Eric Paisley taught woodwork at Reydon School, and his wife was Head Teacher at Southwold. Of our crew, Dick Leon and Frank Upcraft were pupils just after WW2. The photograph is the school photograph of 1947: Mrs Paisley is standing top left, and standing top right is Frank Upcraft, our Curator, who admits to having received many a smack from Mrs Paisley! (No doubt well deserved Frank!  Do any readers recognise themselves or any friends - ­ JHS?) Standing next to Frank Upcraft is Mrs Stelly, a teacher who will celebrate her 100th birthday in October. Many residents still remember the Paisleys who lived in the beautiful flat above Lloyds Bank

We need to furnish the Fisherman’s Cottage and should welcome the donation of suitable Victorian/early Edwardian items, and are seeking small items of furniture, plates, dishes, stone hot water bottles, pots and pans, cast iron shoe lasts etc. If you have any artefact that you think might be appropriate, please telephone Jonathan Hunt (01502 676 190) or, our Curator, Frank Upcraft (01502 724 484). Thank you. 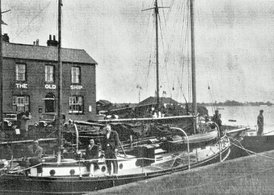 On 8th May we commemorated VE Day on 8th May 1945 and many of us also remembered, and our thoughts turned, to Operation Dynamo, the evacuation of Dunkirk exactly five years earlier, in May1940. The Alfred Corry was renamed Alba when Lord Albermarle bought her in 1918: in 1940 she was owned by Mr and Mrs Reeve-Tyler but, for reasons unknown, she did not sail with the little ships to Dunkirk. However the Mary Scott did go to Dunkirk and saved many lives.  After the end of hostilities marked by VJ Day 15th August 1945, the Alba has the distinction of being the first British boat to enter Ostend, and it led the Victory Flotilla.

In 1949 she was sold and became the Thorfinn.  The photograph shows the Alba ín the sea-lock at Heybridge Basin in Essex.

Donations towards daily running costs and our new extension are appreciated

If you would be prepared to give up 3 hours a week to join us as a Volunteer Steward,

Your Museum needs you!

We now have improved access for disabled visitors with the addition of a stair lift to the mezzanine level, which enables access to the exhibition area and a view into the interior of the boat.

The inauguration was performed by the former Mayor of Southwold, Councillor Ann Betts, as well as Southwold's Town Crier John Barber (see below)

We are pleased that at last we can announce that

Phase 1 of ourproposed extension is going ahead!

Details of Phase 2 will be announced later.

Our flagpole has now been repaired and painted.
New flags are flying! 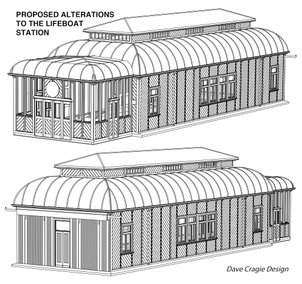 Our new book; The story of the “Alfred Corry” Lifeboat at Southwold is now on sale

Penny Mansfield our Volunteer Steward and Trustee, has spent the last year researching and revising the material, Frank Upcraft, our Curator, provided a great selection of photographs.

The result is a fascinating story with a very happy ending.

£5 a copy – a great present for somebody who loves Southwold. 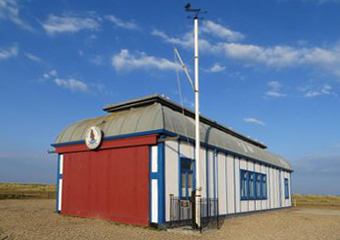 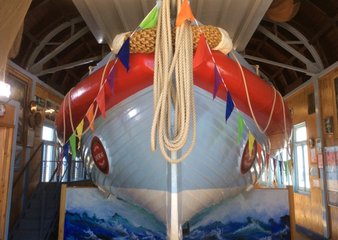 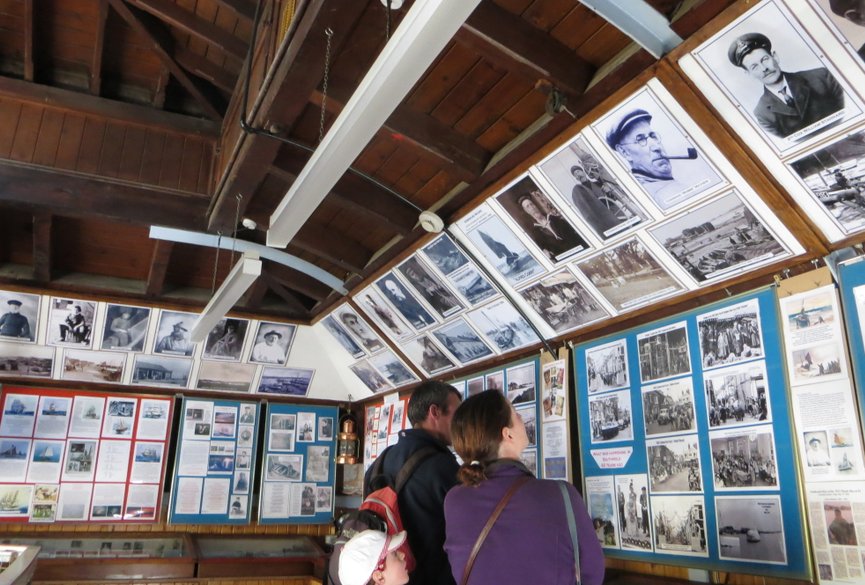 We also have a range of related merchandise including mugs, jugs, pens, colouring books and sweat shirts all emblazoned with the

Alfred Corry logo, the proceeds of which went towards the restoration and currently towards the upkeep of the museum..

Come along and visit us and see for yourself.

We are located in the grounds of the harbour car park in Ferry Road, Southwold, so we couldn't be easier to visit!

We also take schools, parties and coach trips, and anybody wishing to bring such a group to visit the museum telephone 07944 586269

Welcome to the home of the 1893 Southwold No.1 Lifeboat "Alfred Corry"

The 'Alfred Corry Charitable Trust' was set up in 1994 (Charity Commissions No. 1039030) in order to restore and preserve the 1893 Southwold No.1 Lifeboat 'Alfred Corry'. In March 2017 the Trust was registered as a CIO (Charitable  Incorporated Organisation) and the number was changed to 1172006.

The 'Alfred Corry' was Southwold's lifeboat for 25 years from 1893 until 1918 which, during which period, she was launched 41 times and saved 47 lives.

The Museum is situated in the car park at the end of Ferry Road at Southwold harbour, in what used to be the old 1923 Cromer Lifeboat shed, moved to Southwold from Cromer 80 miles away, by sea in 1998.

Follow the links at the top of the pages to find out more about the fascinating story of the people involved in the boat's history, both past and present,  and how it ended up back in Southwold after so many years away. Then there is the story of the old Cromer Lifeboat shed, which through a remarkable stroke of good fortune and quick action became the museum building itself. For those interested in the actual restoration work itself then the restoration section will show ongoing progress over a 15 year period. There is also a wonderful section on local maritime history compiled by our curator, Frank Upcraft, whose sterling pictorial efforts have produced the most colourful and informative additions to the museum's walls,some of which can be seen in the pictures below and here.

Many sections of the website are compiled by the people involved in the work, so you get a real insight into development of the boat  and

museum by the people who made it happen. If you would like to know more, or just come and see for yourself, then you can visit us in beautiful Southwold and see the fruit of many years of dedicated voluntary hard work and love, and be regaled with the extraordinary stories of the lifeboat men who voluntarily put their own lives at risk in order to save those in danger.

The museum is full of items of local history, both of the boat and the shed in the form of various artefacts connected to the industry, and an extensive collection of old photographs depicting all aspects of the boat and its crew and the history of the lives it saved, all displayed in the most wonderful way, and our thanks go to curator Frank Upcraft for producing such a comprehensive series of  displays! Anyone interested in local history will also find a large section devoted to the local fishing and maritime industries over the centuries. A large number of the photographs shown on the website were provided by Frank, to which we offer our thanks, as we do to all those who have contributed to the material on the website. 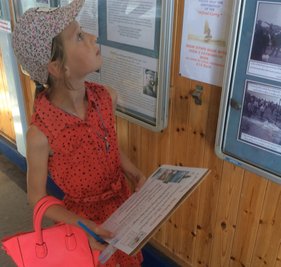 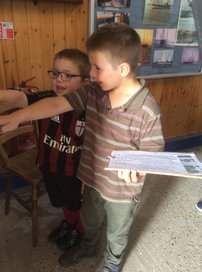 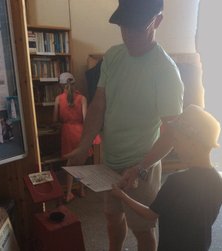 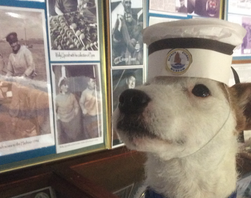 Friendly dogs with well behaved owners are welcome in

Our young visitors were then presented with their booty! 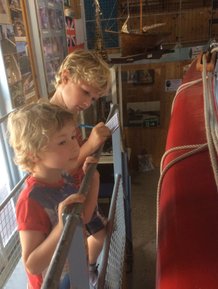 Education and fun for

The basket is a modern replica which contains the original earthernware water bottle which saw service on Southwold's lifeboats. 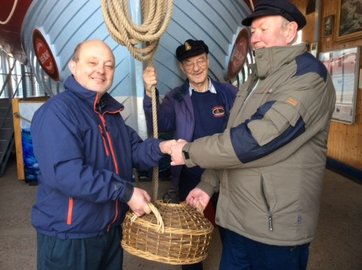 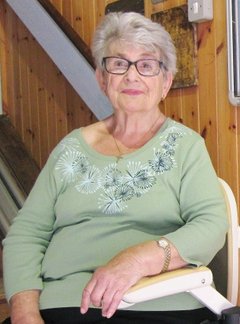 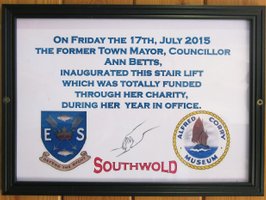 of the new Stair Lift 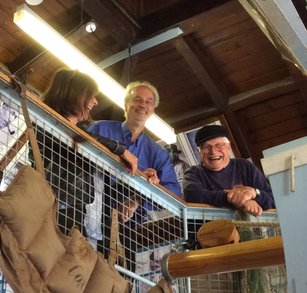 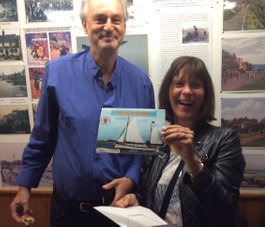 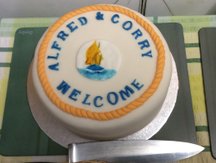 Mr & Mrs A Wald from Holland with flags, music and champagne.

It was a very special occasion, as in 2015, Mrs Corry’s sister Pauli, rang the museum from Delft and explained that her Sister Corry, was marrying Alfred and wondered if we would send a card wishing them well. Two way communication continued  and culminated with the visit.

There was much laughter, and almost some tears, when the Dutch National Anthem echoed around the lifeboat shed. Other visitors to the museum joined in and helped to finish the celebration cake, which the Curator’s wife baked. There was even some Old Amsterdam Cheese too.

Come along and pay us a visit. We can’t promise you cake and cheese, but you’ll get a warm welcome!