The Restoration of the "Alfred Corry" Lifeboat

The work of restoration/conservation of the boat has been an ongoing process for the past 15 years or so, and commenced in earnest once the boat was housed in the old Cromer Lifeboat shed. Progress was steady over that period, usually taking place on a Wednesday, though some of the more dedicated members were there rain or shine, and summer or winter lovingly restoring the boat to its former glory, and it stands today as a testament to the hard work provided by all of the resoration team who are unpaid volunteers, and most of whom are retired.

It is fortunate that the National Maritime Museum had the boat’s original plans on file, and once having obtained copies, many parts of her original structure that had been removed or altered over the years could be re-created. Interestingly, a close examination of some remaining features in the boat revealed that the original builders (Messrs. Beechings) had not followed the drawings exactly.

The restoration has been ongoing since 1999 and has been carried out by a a team of skilled, voluntary craftsmen of which the following must be noted for their sterling efforts:

Richard (Dick) Leon, a lifelong resident of Walberswick, who is a highly skilled carpenter. Though not trained as a boat-builder, he has previously built and repaired several boats, and his workmanship is second to none. Working with him was John Cragie, great grandson of the first Coxswain of the “Alfred Corry”, who, as a retired Master Mariner, could turn his hand to many of the tasks required.

Various metalwork tasks were carried out by others, including John Cragie’s sons:- Robert having made such fittings as steel thwart knees, dowsing beam brackets, washboard pins, stem and stern bands, rudder pintles and gudgeons and rowlock plates, while David designed the relieving valves , and oversaw the making of these by Metalfacture of Leicester, as well as producing copies of drawings and photographs, a number of which are on show in the Museum.

Dennis Ball was also invaluable in producing metalwork, such as adapting a number of bolts for fastening the fender frames, making a fine replica of the iron tiller, making up the copper sleeves for the through fender scuppers, and more recently has produced a full set of guard rope stanchions, as well as various smaller items of replica ironwork, including over 30 handmade blocks and tackle for the rigging.

Since 2004 other volunteers joined in the restoration, notably Mark Evershed, the late Ian White, Ron Remblance and Peter Shore, each bringing further expertise to bear.

Much of the wood used in the restoration, namely Larch, Oak and Douglas Fir, was supplied by Richard Murphy, of Sudbourne Hall Sawmill, near Orford. As the dimensions of the wood were quoted as “finished sizes” he was able to provide exactly the thickness required for this, and avoid a lot of extra work and wastage. Where softwood has been used, this has come from local suppliers.

By September 2007 the bulk of the woodwork had been completed. The damaged hull planking had been replaced where necessary, all internal construction of ballast tanks, and “hold” for buoyancy cases had been built, and the Douglas fir decks have been laid on new deck beams. The long tedious job of constructing the fenders (waling) on both sides is finished and both sides had been covered with canvas and painted, Dowsing beams (mast supports) fitted, and the plaques for the RNLI “crests” fitted to both bows.

Subsequently, a number of less obvious tasks were carried out, such as the lining up and fitting of the stanchions, followed by fitting the guard ropes, building up coats of paint on the oars, fitting eyebolts for grab ropes and then the grab ropes themselves,the fore and mizen mast “jeers”, the fore sheet post in the centre of the boat as well as a number of small cleats and brackets.

The main job of restoration was completed by 2012, though there are still many "fixtures and fittings" still to be made including sails, and even when the boat is completed, work does not stop there, as the old Cromer Lifeboat shed, now the main museum structure is in need of substantial work to ensure that it remains watertight and secure, so more volunteers and donations are always welcomed, and greatly appreciated.

The links above show the various stages of restoration over the years, with detailed progress from 2004 - 2007 provided by David Cragie and other pictures provided by various members of the museum. 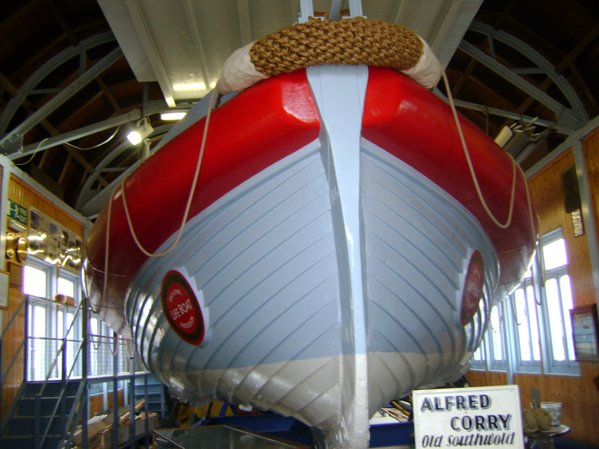