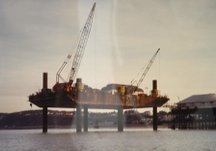 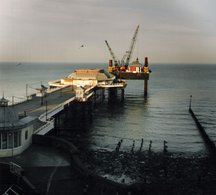 Loading the shed from Cromer pier on to the barge. 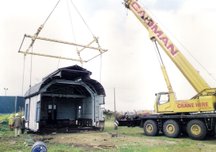 On the barge at Lowestoft Quay 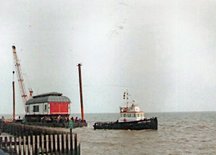 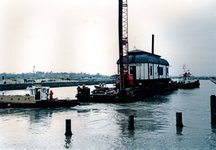 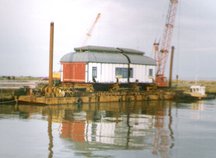 Ready to load onto dry land!

Fixing the skids into place

On the skids waiting to be moved into the correct position

First half in position.

Moving the second half into position. 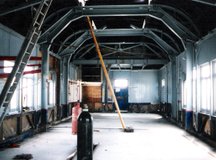 The shed in its original position at the end of Cromer pier.

In 1997 the Cromer Lifeboat shed was removed from Cromer Pier to enable both a new shed and pier to be built. The contractors cut it in half and removed the old shed to Lowestoft by sea.

Thanks to the efforts of Mr Dennis Ball of Southwold, the Trust managed to acquire the shed using grants provided from the Southwold Trust, the Adnams Charity and Waveney District Council enabling the purchase and siting of the building at Southwold harbour, in April 1998.

The 52 ton shed was bought in by sea through the narrow harbour entrance,

and slid across the car park to its final position. It took 18 months to make the shed worthy and sound, but the vagaries of the North Sea take its toll on such an old structure, and the shed is currently undergoingback extensive, external repanelling to ensure it is restored to its former glory.

Originally built by the RNLI in 1923, the building type was the first of its kind. Oak and pitch pine beams, diagonally boarded Columbian pine studwork walls, with a distinctive curved zinc roof, echoing seaside pier architecture of times gone by. The shed is 60ft by 24ft internally, and some 30ft at its highest point.

The shed has a history and heritage of lifeboats (when it was at Cromer) second to none in the United Kingdom. It has seen the coming and going of

a number of lifeboats the saving of over 1000 lives, and of its association with the most highly decorated lifeboatman of the R.N.L.I. to date, Coxwain Henry George Blogg, who was a lifeboatman from this shed for 53 years. He was awarded the Gold Medal of the Institution (which was only given for extreme gallantry) three times, the Silver medal four times, and he held the George Cross and British Empire Medal.

The following is the story of how one of our trustees Peter Johnson, became involved with the museum, through a unique problem, that his particular expertise was able to resolve.

THE RECENT HISTORY OF THE CROMER LIFEBOAT SHED

( by someone who was around from late 1997 onward – Peter Johnson )

It was a Friday evening in mid-December 1997. I had just walked in and turned on the local news. There was this chap talking about a problem they had getting an old lifeboat shed, removed from Cromer pier, from Lowestoft on to a site in Southwold harbour. The council had prohibited the use of a large crane at the quay because of the weak harbour wall and they simply could not work out any method of doing this particular job. At the end of the piece, there was a telephone number to call.

I did this and discovered it was Dennis Ball, a Trustee of the Alfred Corry Museum.

We had a brief discussion and agreed to meet the next day at the RNLI station in Southwold. Meeting with Dennis was very interesting; he was clearly an extremely astute and very competent engineer. I explained that, as an offshore marine project manager, it was my job to do this sort of thing and I felt that it could be done. I agreed to look at the shed and to see if I could devise a method of achieving the aim.

The following week we had another meeting, this time including John Rochester of John  Martin Construction. JMC was the owner of the Cromer Lifeboat shed, having removed it in two sections from end of Cromer pier.

I proposed a method of getting it to site in Southwold, which was accepted by both parties. JMC agreed to pour the foundation slab, to transport the building to Southwold on their barge and to pay for a tug to take it there. This was an extremely generous gesture of support.

Between Xmas 1997 and Easter 1998, I worked very closely with JMC to   prepare all the specialist items and equipment needed. We installed skid shoes on the steel ring beam that reinforced the sills of the section. These would support the sections as they were pulled ashore over a bridge of U shaped sheet piles. To avoid putting any load on the quay heading, this bridge was supported on the transport barge and at a point some 30 feet away from the quay head.

A fully detailed project plan was developed. This covered every aspect of the whole operation, from the initial lifting in Lowestoft through to the final placement of the building in-situ on the prepared slab foundation in Southwold.

One week before Easter 1998, we lifted the two sections of the shed on to the barge in Lowestoft ( in a snow storm !!! ). It then took a some time to properly secure the building for the voyage. The next day the tug arrived, connected up and we headed out of harbour bound for Southwold. I was towmaster for the voyage and handed over control to the Harbourmaster ( Ken Howells ) on arrival.

Ken came out in a fast RIB to check that all was well. He boarded the tug as a pilot and

we then followed the plan that Ken and I had developed in the preceeding weeks. All went according to the plan and we then set about preparing for the landing!

The two sections were ofloaded on successive days and the following week saw the shed sections moved across the car park and on to the slab in their final position.

SORTING OUT WHAT WE HAD

The shed was in a bit of a sorry state by the time it had been placed in its  position. After all, it had been cut in half, chopped about to get in the reinforcing, transported twice by barge, lifted four times and then dragged across the car park on to the slab!!

We had managed to get the two sections lined up within a +/- 5mm tolerance and set about repairing where it had been cut in two. Dennis made some fish plates for the carlins ( longitudinal heavy roof beams ) and we infilled with stained T&G panels. At that time we sealed the join externally with felt and filler.

The heavy steel frames that were used to service the lifeboat were removed  and scrapped. A large fuel tank of about 800-1000 gallons, and the supporting steelwork was removed from the East end of the roof. The internal panelling ( an old imperial profile ) was used to repair the holes made around the perimeter in order to install the reinforcing beams to the sills.

Finally, the whole of the interior panelling was replaced. This was made possible by a large donation from a local born businessman, Mr Michael Rockall. While the shed was empty, we installed fluorescent and flood lights.

At last, in October 1998, we were able to bring the boat into the shed.

The first job found necessary was to build a kiosk for the stewards. Due to the  loose fit of the main doors, and the fact that they needed to be partly open to admit visitors, it was often very uncomfortable for the stewards. The kiosk would actually support viewers on the roof, if necessary!

The second job was to build the mezzanine deck in order to increase the  display area available and obviously to provide another view of the Alfred Corry. Much later on we built the office and, again later on, enclosed the workshop. ( Elf & safety stuff!! )

Currently the shed is undergoing major structural works, and the exterior

is being completely reclad, and repainted, and the roof needs to be completely fibreglassed and waterproofed, and there are plans further afoot to construct an extension, so there is much still to do, and all donations to the restoration fund are gratefully received in person at the Museum, or also by our Treasurer who can be contacted here.

The museum in November 2012 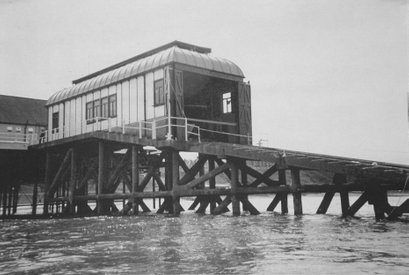 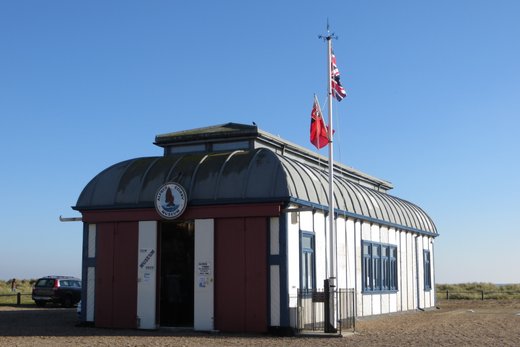 A  Home For The Alfred Corry

The following video was made by Mr. David Bucknole and is the story of the moving of the lifeboat shed covering its entire journey from Cromer Pier to Southwold Harbour between 1997 and 1998.