This page is dedicated to the memory of Dennis Ball, 1920 - 2012, a 'mainspring' of the museum, without whose tireless work over the years both on the boat and the building, the museum would not be what it is today. Jack Storer, another of the museum's stalwarts tells the story of how how he met Dennis and got involved with the museum, and pays tribute to his memory:

Memories of  Dennis Ball and the Alfred Corry Museum

I knew Dennis Ball for 33 years and was associated with him in the development of the Alfred Corry Museum from the 1990s until his untimely death in 2012.

Dennis was a remarkable man never happier than when out of doors, preferably in Southwold harbour,      and ‘messing about in boats’. Having spent a large part of his RAF wartime service as the flight engineer in Sunderland flying boats, over the Atlantic ocean, I suppose it was only natural that in retirement he gravitated to Southwold harbour where, for many years, he had his own fishing boat on the sea. He was one of the most practical engineers I have ever met, and I am not the only local resident who has had cause to appreciate his ability to repair and, if necessary, virtually to remake some broken piece of equipment.  He was a friend to all and I doubt if he had an enemy in the world.

The present museum building started life in the 1920s as Cromer Lifeboat Shed perched perilously at the end of Cromer pier, and was brought to Southwold in April 1998. The story of the shed has been told elsewhere here by others. I first knew Cromer lifeboat and its shed in the 1930s, and never thought that it would play such an important part in my life.

Although I am an Army man yet, like so many others, I have always been interested in boats, and, in  about 1996, Dennis first took me to see the Alfred Corry, the former Southwold rowing sailing lifeboat, which forms the centrepiece of the museum. It was stored in a shed halfway up the harbour, and in the gloom it looked massive. Already mounted on a wheeled carriage designed and largely made by Dennis it had been stripped of all its fittings; new thwarts had been fitted to preserve the integrity of the hull, but it looked lonely and forlorn, and far removed from the graceful boat it once had been. And that was when I first heard of the proposal, largely pie in the sky then, to restore her to her former state as Southwold’s famous No 1 lifeboat. There was no shed, very little money, no thought (as far as I am aware) of an eventual museum, and that is when Dennis came into his own. Others, led by Captain John Cragie, the last owner who had generously donated the boat to Southwold, worked lovingly over the years to restore the boat to its former glory, but throughout the years I have no hesitation in saying that it was Dennis who, when the shed appeared on the scene, kept the whole concept alive, guided our thinking as the plans for the museum came alive, and in good times and bad, never lost faith in the final outcome.

After his death I was involved in the plans to erect a flagstaff in his memory, overseen by Frank Upcraft, our curator, and which bear the same famous words as appear on the memorial to Sir Christopher Wren in St Paul’s Cathedral,  ‘si monumentum requiris, circumspice’ - 'if you would see my monument look around you'. All of us who have worked on the boat or on other tasks connected with the museum would surely agree that Dennis was the mainspring – always there, mending or making, solving problems, pouring oil on troubled waters, and the result is what you see today.

I have many personal memories of Dennis. In 1998 when the shed was brought here by sea from Cromer it had been literally cut into two parts and it was Dennis, fast approaching 80 years of age, who climbed ladders and bolted the parts together.  It was then that I accepted his invitation to become a steward and trustee and appeared every Friday and Sunday afternoon in the museum until illness forced my retirement from stewarding at the end of 2011. In all those years whenever I was on duty Dennis would, more than likely, be working in his workshop in the shed but we usually managed a break for a cuppa or an ice cream.

When we wanted an office and a workshop he and Peter Johnson, whose story appears elsewhere, designed and made them: they cost the Trust nothing apart from some materials. When we came to rig the boat we needed blocks and tackle – over 30 of them. 100 years or more ago we could have bought them in any shipyard, but not today. Instead they were made in the shed, and Dennis made the blocks and all the metal fittings setting up his own forge for the purpose. I remember many a time when we had a school party visiting we would divide the children into two parties and Dennis would have one party at one end of the shed and I would have the other at the other end, and then we would swap them over.

And even when he had to devote more and more time to caring for his wife he would often bring her down to the shed on a Sunday afternoon to have an ice cream.

And one final memory: some years ago the Rev Jane Wilson then vicar of Southwold suggested to me that  it would be nice to have harvest festival at the Alfred Corry Museum. Dennis accepted the suggestion with alacrity. He arranged for the boat to be half out of the shed and decorated with fishing nets, (see pic below) arranged with Adnams to lend us an articulated truck to house the choir, organist and clergy and even made a special stairway so that the Vicar could mount the massive truck with dignity. Some 150 people attended "The Blessing of the Nets" ceremony and the service has been repeated on alternate years since – and always blessed with fine weather. Dennis was a truly remarkable man of many parts and my own life was greatly enriched by our friendship.

Whoever said life in old age was boring!

The following is a copy of the tribute paid by Jack Storer to Dennis Ball at the Flagstaff ceremony on 6th October 2012.:

"I knew Dennis well and greatly admired him. Before WW2 he was living in Southern Rhodesia (now Zimbabwe) and was an apprentice engineer with Rhodesian Airways. On the outbreak of war it was absorbed into the RAF; Dennis was transferred to England and spent the war years first as a ground engineer until he re-mustered as a flight engineer on Sunderland Flying Boats. These flew on Atlantic patrols lasting 24 and even 30 hours, protecting our merchant convoys.  On one famous occasion his plane was shot up and sustained serious damage to the oil tank, absolutely vital to keep the engines running. Dennis crawled into the wing and plugged the leaking oil tank as best he could even using bits of his own clothing. He held an enamel bowl beneath the leaking tank and, as it filled he poured the oil back into the engine. He did that for many hours in freezing conditions and almost total darkness, and enabled the plane to return safely to base. That incident caused his severe deafness and acute tinnitus in later life. For that action he was recommended for the award of a DFM Distinguished Flying Medal (DFM) but it was never confirmed. Later in the war he flew in Wellington and Lancaster bombers and it is a measure of the man’s humanity that he took great comfort from the last Lancaster missions he flew to drop food to starving people in Europe and Scandinavia.  After the War he rejoined the RAF, finally completed his apprenticeship at the famous RAF Apprentices School, qualified as an engineer and rose to the rank of Wing Commander.

On retirement he became Chief Engineer of Adnams but did many other things. He advised the Fox Trust on the maintenance of their properties; he was magic lantern projectionist for the Southwold Decorative and Fine Arts Society for 18 years, was a member of the Harbour Users Association, and would help anyone who sought his assistance. I don’t think he ever said ‘No’ to a request for help.  But it was the restoration of the Alfred Corry lifeboat, and the former Cromer Lifeboat Shed, with which he will always be remembered.  Captain John Cragie, who with his wife donated the boat to the Trust, led a team of craftsmen who did a superb job with the restoration of the boat over many years. On numerous occasions Dennis contributed to this marvellous effort by repairing various damaged parts or, where necessary, making them afresh. In my mind the most beautiful example of his work are the many ‘blocks and tackle’ in the rigging of the boat. 100 years ago we could have bought those in any shipyard, but not today.  Dennis was quoted between £75 and £80 each to manufacture them which we could not afford.  His answer was to make them himself in his little workshop, including all the metalwork.  There are over 30 hidden away in the rigging, and they are things of beauty.  And Dennis was 90 years of age when he embarked on that venture!  He truly was a remarkable man, and one of nature’s gentlemen.

We hope you will visit the Museum and see these things for yourself.  If you are interested in boats and Southwold’s maritime history, and could spare a couple of hours a week to help us, our Curator Mr Frank Upcraft  (01502 724484) would be delighted  to hear from you. Please help us if you can."

The Alfred Corry made ready for the "Blessing of the Nets" ceremony in 2010.

The 2013 "Blessing Of The Nets" ceremony

The annual service of Blessing the Nets took place on Sunday 22nd September 2013 at The Alfred Corry Museum in Southwold Harbour. Led by the Reverend Simon Pitcher, supported by Mr Victor Scott, Director of Music, and the choir of St Edmunds parish church, sheltered by a massive transporter kindly loaned by Adnams, in the presence of a large congregation. The hymns were old favourites, much loved by seafarers, and the lessons were read by a lifeboatman, a trustee of the Museum, and a representative of HM Coastguard. It was a most uplifing service, wíth the Red Ensign and the Alfred Corry pennant, proudly flying from the flagstaff, dedicated in 1912 in memory of the late Wing Commander Dennis Ball.

The tradition of blessing the nets has ancient roots: in the days of the tithe, Blythburgh received a percentage of the herring catch. In Tudor and Stuart tímes the fishing industry prospered reaching its peak at the beginning of the 20th century when the new Southwold Harbour was constructed. The herring trade was mainly with North Germany, Poland and Russia, but came to an abrupt end with the outbreak of the Great War in August 1914. Ít revived after the war ended in November 1914 but never returned to its former glory, and slowly died out. It survived at Lowestoft and Great Yarmouth until the 50s when herring almost disappeared from our tables. In recent years the taste has revived, wíth longshore caught herring returning to our tables as 'bloaters' from local smoke houses. May the harvest be plentiful. 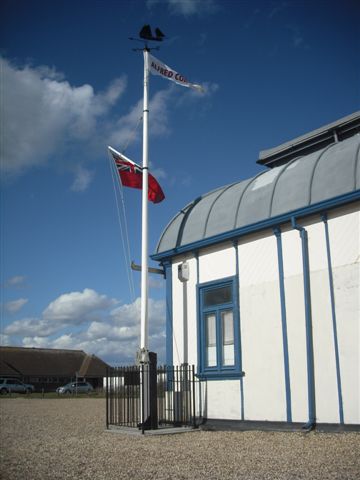 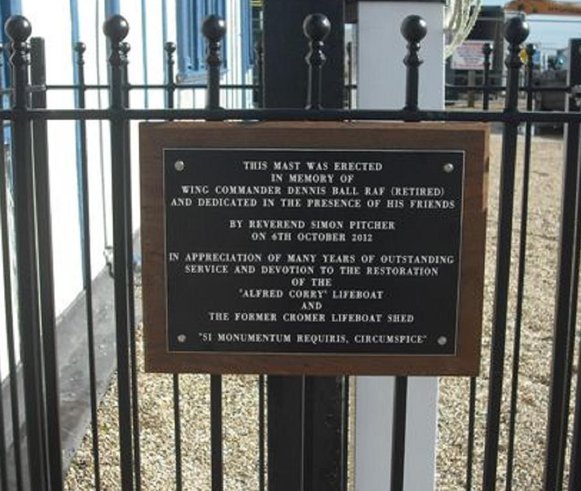 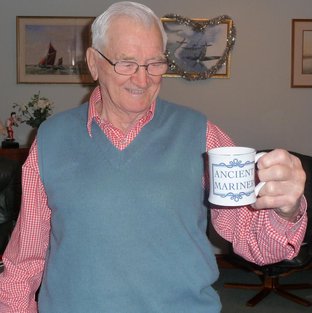 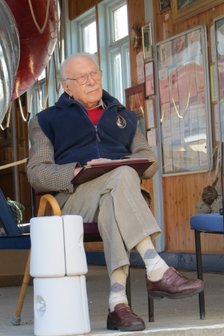 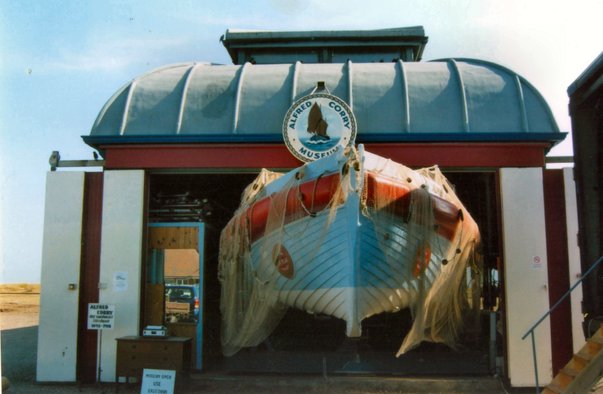 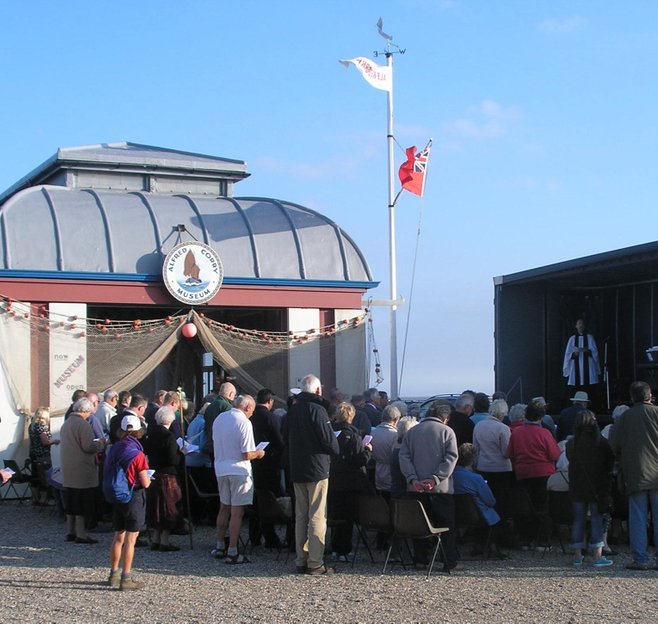